Upon returning home from our Tri-Battle at Camp Kerchoki, I found the letter you had sent before I left warning me that I would be making a “huge mistake” challenging you.

It wouldn’t have stopped me anyways. And despite the fact that you broke a few of my bones, what hurts the most is my broken heart. I can not believe that I lost in EVERY ROUND, thereby having to forfeit not only my wife to you, but $100.

I still believe that I would have done far better in the cheese connoisseurship round had I not suffered several concusions in our boxing match. It’s a shame that you had a flashback in the ring and thought I was an enemy you had to brutally assault. But, c’est la vie, I suppose. Just please alert everyone in the camp that normally I am nothing short of brilliantly educated when it comes to fromage.

Also, I believe that in your specialty round, Performing Motivational Speeches from Sports Movies in Costume, I was cheated out of a victory. While it is not a movie, my portrayal of Hayden Fox from the series “Coach” in the episode where he and Christine go away for a weekend for marriage counseling was nothing short of RIVETING and APT. If series creator Barry Kemp were to have seen that performance back in the late 80s, it would have been I that got the role instead of Craig T. Nelson.

However, the truth of the matter is I have lost, and I must be mature about it. So, as per the beautiful, deadly Estella, I have attached the divorce papers. Please take a look 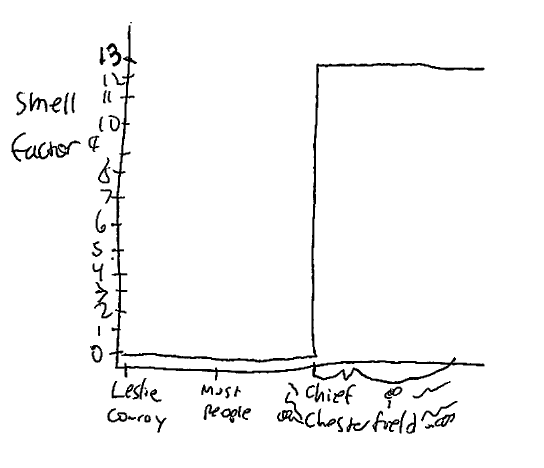 WOOPS. I accidentally enclosed a graph indicating your VERY HIGH smell factor! This graph shows you at a Level 13 “PowerHouse Smellburger,” meanwhile I’m down there at a level 0, or “Musk-licious.” I guess Estella’s trip to Camp Kerchoki made her fall in love not only with you, but with a world of STENCH.

If you can find time between your busy job of STEALING PEOPLE’S WIVES, please let me know if you have found my son, Grover. Once I know he is safe, I can probably start to move on.

Jockey Up - Letter 1
Confused? Need to catch up? Here's the first letter of the latest story.